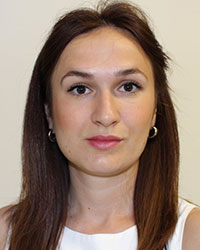 Compared to 2019, the average time spent on social platforms in 2020 increased by a record 100% across all platforms.

In every new study, experts point out that children are spending more time consuming media than ever before, and they are constantly urging that time be limited, as well as warning against arising risks.

Media consumption time - then and now

A KaiserFamilyFoundation study published in 2010 showed that even then, children aged 8 to 18 spent an average of 7 hours and 38 minutes a day consuming media content, although this number is actually higher if we take into account that children often use multiple media simultaneously (for instance, while playing video games, they listen to music on the radio). Today, teenagers dedicate up to 9 hours a day to media. Therefore, it comes as no surprise that as many as 66% of parents think that their children have too much screen time, and 59% of them are of the impression that their children are addicted to mobile devices.

When we talk about younger children, in 2017 in Croatia, the Polyclinic for Protection of Children and Youth of the City of Zagreb conducted the first national survey on preschool children and their screen time. The results show that among almost 700 preschoolers, there isn’t a single one who does not use at least one electronic device, and that preschoolers spend an average of 2.4 hours on weekdays and 3 hours on weekends in front of the screen. Experts point out that children up to 18 months of age should have minimal, or almost no contact with media, children from 18 to 24 months should watch exclusively educational content under supervision, and children ages 2 to 5 should spend a maximum of 1 hour a day during the week and on weekends up to 3 hours consuming media content. In most cases, parents do not follow these recommendations.

The Tik Tok app is blowing up in popularity

Although YouTube is still the app on which kids spend the most time, Tik Tok is catching up fast. According to the latest research published in 2020, children spend an average of 85 minutes per day on YouTube and 80 minutes on Tik Tok. 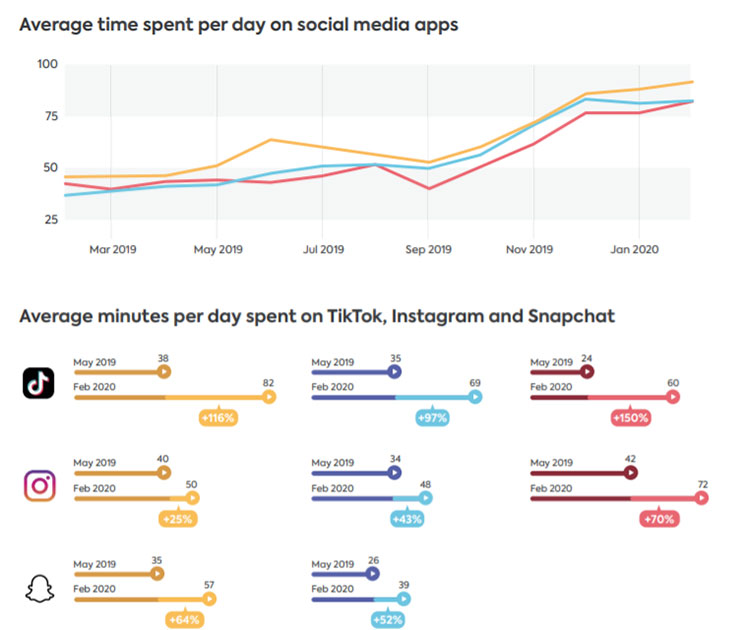 Tik Tok is a relatively new social network, launched under the name Musical.ly, and in 2018 it was taken over by the Chinese company Byte Dance, when its name was changed. But all content and users were automatically transferred to the new platform. The application is intended for creating, editing, commenting and sharing short videos (up to 15 seconds) on any topic. It has gained popularity due to its fun character and easy use. Some point out that the Tik Tok app is like it was made for quarantine, because it involves recording videos indoors - almost all of them were taken in rooms or some other place in the home, while the posts on Instagram are about travel, socializing and various outdoor activities.

It is TikTok that is responsible for the rapid increase in the use of social platforms. So far, the app has been downloaded more than 2 billion times, and in the first quarter of 2020 alone, it recorded as many as 315 million downloads - more than any app ever in a single quarter.

The largest number of users is in India, followed by China and the United States, with 800 million active users per month.

Although both Instagram and Snapchat are recording a large increase in downloads and users, Facebook remains the leading social platform. 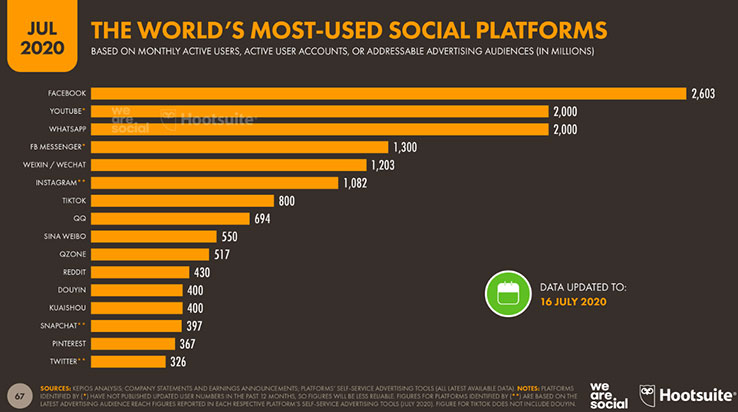 Although social platforms and the Internet in general have many advantages, it is important to be aware of the limitations and challenges they pose to us.

Whether it's watching TV, playing video games, communicating with smartphones or social network activities, media can easily become an addiction. When we talk about the Internet, we must be aware that it is a vast virtual space in which it is impossible to legally regulate all Internet content. Children access the Internet mostly through smartphones that are light and portable, thus becoming an integral part of activities in children's daily lives. They use them during meals, before bedtime, immediately after waking up, and even during the time they spend with family and friends. Precisely because children can take them with them wherever they want, they can easily hide from their parents if they want to secretly spend time surfing. Likewise, children and young people develop ways of using media that are completely different from those used by their parents. They no longer make a distinction between the real world and the virtual world.

In addition to addiction, a big issue also arises with the content that children encounter in the media. Take Tik Tok as an example, the social network that gained the most popularity among children, we can see that in the second half of 2019, they removed as many as 49 million videos due to inappropriate content. A quarter of these cases involved nudity or sexual activity. 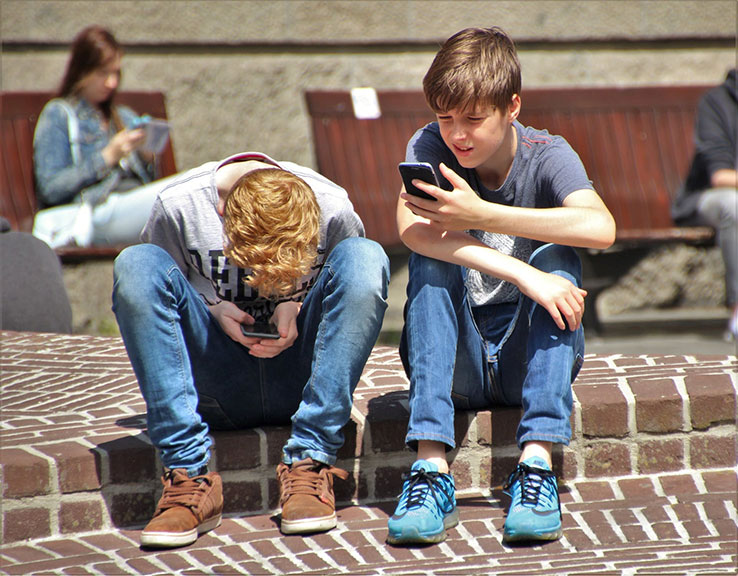 Almost all social networks have been associated with some user-related scandals. Tik Tok, known at the time as Musical.ly, was taken to court for illegally gathering information on children under the age of 13 and agreed to pay a $ 5.7 million fine for violating COPPA rules.

A live video of the mass murder of 49 people in New Zealand was posted on Facebook last year. Facebook representatives pointed out that they found out that the video was posted online only when the police informed them about it. The recording was immediately removed, but it was up long enough for people to see it, download it and continue sharing it on other social networks. This is where the problem of recognizing violent and inappropriate content posted on the Internet arises. The verification of content that is posted on networks is done by artificial intelligence, which, as we can see from this example, can very easily miss content that should never be published.

When asked what concerns them the most in terms of using new media, nearly half of parents pointed out content that incites children to self-harm. One case that confirms that parental care is not without reason is the suicide of little girl Molly Russell. Her parents directly blame Instagram for this tragic case because of the content their daughter had access to via the app, and it relates to drawings, videos and pictures showing suicide methods. Following that incident, Instagram pledged to do its utmost to remove all such content and to prevent it from being posted online.

The time that children spend consuming media since the beginning of the coronavirus crisis, i.e. COVID-19 pandemic, has drastically increased. Simply adding up the hours children spend remote learning, i.e. in online lessons or TV lessons will already increase screen time compared to March of this year. Apart from that, due to the lockdown, instead of playing outdoors, children spent extra time in front of screens, communicating with friends or simply having fun with cartoons, shows, video games and social platforms.

The use of (new) media stops only when children are asleep. Before the COVID-19 outbreak, at least during classes, children were involved in face-to-face interaction with each other, and currently that part has also been transferred to the virtual world. Social platforms are no longer an alternative to social inclusion, instead they have become one of the basic ways of socialization for children and the youth.

The increased time children spend consuming media means higher chances for them to be exposed to a greater number of risky content. With excessive media consumption and inappropriate online content, there is a long list of dangers that children may face. From false representation, pedophilia, peer violence, to viruses, hacking, identity theft, etc. These are all problems that will not go away over time, but can only escalate.

Almost all experts who have dealt with the influence of mass media on children emphasized the key role of parents. Parents should have the function of media educators who will introduce children from an early age to all the positive and negative sides of media. However, parents themselves often lack knowledge and information about new media and point out that children are more versed in them than themselves. Responsibility is often transferred to educational institutions, and teachers point out that they themselves are not educated enough to pass on media literacy to children. Anyone can shrug their shoulders and wait for someone else to do something or try to do everything in their power to help children cope in the best possible way with the challenges they face on a daily basis.

What can we do?

We can install various applications to monitor children, set rules, impose restrictions, which can be beneficial, but only education, communication in schools and within the family, and encouraging children to think critically, can prevent and help identify potential dangers.

This begs the question, will the time children spend consuming media ever return to the state it was before COVID-19, or will it, like many other things, become “new normal”.

Today, with media dominating the lives of children and youth to such a great extent, more than ever, education and encouragement to think about media is needed. It is time for media literacy to get the space it has long deserve - in school, family, private and public life.

Please read the rules before commenting or republishing
Note: The views and opinions expressed in this article are those of the author and do not necessarily reflect the views of the Institute of Communication Studies or the donor. 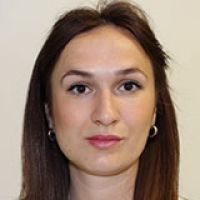 Katarina Blažina Mukavec was born in Zagreb. She holds a Master's degree in Communication from the Faculty of Croatian Studies, University of Zagreb in 2015. Since 2012, she has been an active member of the Society for Communication and Media Culture and participates in the creation of educational content and lectures for primary and secondary school students, as well as webinars for educators from all over Croatia. Since 2016, she has been the coordinator of the section of lecturers and volunteers in the Children of the Media project, which the Association is implementing with the aim of improving media literacy of the citizens of the Republic of Croatia.