Albania – a country haunted by migration and reputation woes

My Albanian friends felt ashamed of how the world perceived them. Very aware of Albanians’ reputation as criminals and drug traffickers, they feel torn between pride for their nationality, embarrassment, fear, and anger.

On Remembrance Sunday 2022, a group of British and Albanian citizens stood solemnly in front of a war memorial in central Tirana as the haunting sound of The Last Post was played by a lone trumpeter. The purpose of the ceremony was to commemorate the lives of the British soldiers that fought in Albania against fascism and the Albanians that fought alongside them as allies.

Meanwhile, online, a war of words erupted after Albanians living in Britain protested against what they described as the hateful, xenophobic, and discriminatory language used by government officials against them amid a wave of irregular migration to UK shores. Perpetual pot-stirrer Nigel Farrage used the opportunity to accuse Albanians of high-jacking the so-called “remembrance weekend” and being disrespectful to the British war effort while being blissfully unaware of the history between the two nations.

The result was a media and social media whirlwind full of slurs against Albanians- criminals, drug lords, traffickers, murderers, benefit scroungers- you name it. Most of these words were bandied around by people who could not even point to Albania on a map, but the words cut deep in Tirana.

At the end of October, British Home Secretary Suella Braverman called migrants, including Albanians crossing the channel en masse an “invasion.” British media ran with the rhetoric and developed it into a narrative that an army of young Albanian men looking to traffic drugs and sex, engage in organized crime, and live off the generosity of British taxpayers were besieging our shores.

The violent implication of the word “invasion,” used exclusively in matters of war, combined with sweeping statements about criminality, organized crime, and gangs, struck fear into the heart of middle England.

But their fears were not totally unfounded. During the summer, the number of people crossing The Channel in rubber dinghies increased significantly, causing alarm for the Home Office. It soon emerged that up to a third of those making the perilous journey were from Albania, a NATO member that recently opened EU accession negotiations and a safe, albeit rather poor European country.

Once in the UK, many go to work in the informal economy, in kitchens, as cleaners, in hotels, or in the case of some, particularly those with a debt to pay for their transit, in cannabis farms or drug trafficking structures.

While the increase is significant, waves of migration from Albania are nothing new. After the fall of communism in 1991, thousands poured over the newly opened borders, desperate for freedom and democracy. In 1997, as the country teetered on the brink of civil war following the collapse of a web of pyramid schemes that effectively bankrupted half of the country, thousands more sought a life abroad. Over the subsequent decades, thousands left every year for the UK, Europe, and the US.

EU figures have told a similar story over the last decade, with Albanians consistently ranking amongst those with the most applications in the bloc. This summer, France saw more asylum seekers from the country reaching their borders- nearly 8000 until June, with thousands more in other EU countries like Germany and Greece. These figures are also significantly less than the almost 70,000 that applied for asylum in the EU and UK in 2015- numbers that pour cold water on Braverman’s assertions.

Today, it is believed that some 1.4 million people have left Albania since the regime’s fall, with 700,000 of those leaving in the last decade. The reasons why they leave are complex but include poverty, corruption, intergenerational trauma on a societal level, poor infrastructure, frustration, and a historical predisposition to emigrate.

In 2022, the European economic crisis put a further squeeze on people, and the phenomenon of smuggling gangs using TikTok to advertise Channel crossings for upwards of GBP3000 made it much easier to reach their young, educated, and tuned-in target audience.

But we must also not forget that many Albanians have successfully been granted asylum in the EU and UK, with up to 53% being approved in the first instance and another 50% on appeal. Common reasons include fleeing trafficking, domestic violence, blood feuds, crime, and loan sharks.

As the public debate roared, I spoke to an Albanian friend living outside of London with two young children. A successful businessman and long-time legal resident of the UK, he was distraught that his daughters had come home asking why their friends were not playing with them and were saying that Albanians are criminals. I heard similar stories from other Albanians living throughout the country who said their young children had been reduced to tears and ostracised in the playground. 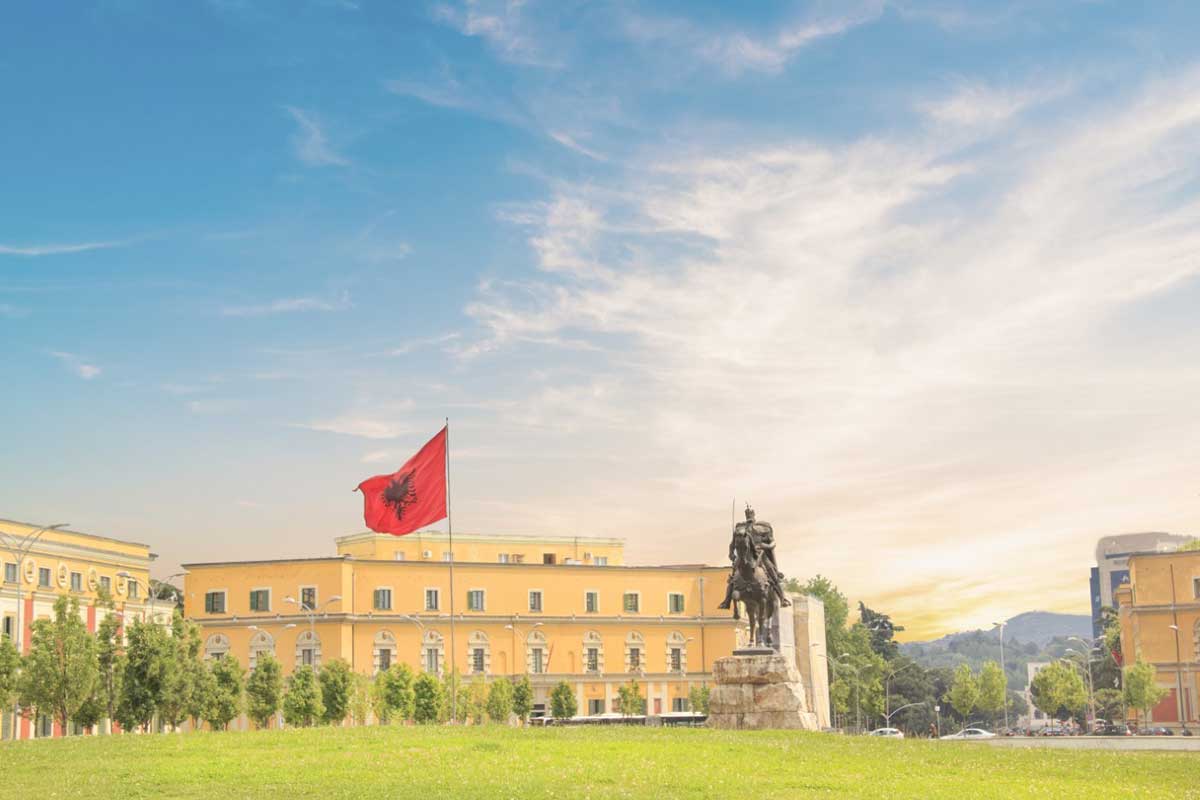 As a mother to an Albanian citizen, I even experienced it first-hand when on the phone to the passport office, no less. When inquiring about the status of her citizenship application, the gentleman on the phone made a joke about “another Albanian wanting a British passport.” I was stunned.

In Tirana, my Albanian friends shook their heads, sighed, and felt ashamed of how the world was perceiving them. Very aware of Albanians’ reputation as criminals and drug traffickers, partly founded and partly due to xenophobia and lazy stereotyping, they feel torn between pride for their nationality, embarrassment, fear, and anger.

But the fallout of this toxic discourse goes far beyond jibes and playground bullies. As already mentioned, amongst the thousands of asylum applications, there are those that are totally founded.

There are women fleeing horrific domestic and sexual violence that cannot get justice or protection, there are those who have escaped from traffickers and have been rejected by their families due to stigma. Some LGBTIQ community members cannot work, rent a home, or walk in public alone because of the hassle they receive. Then there are others who flee criminals, revenge killings, and the occasional case of political persecution.

What do the politicians say?

So what does Albania’s political elite have to say about the situation, and how do they intend to stem the flow and plug the hole?

Albanian Prime Minister Edi Rama told me in an interview recently that he cannot tell young people to leave as they have the right and freedom to do so, but he hopes that some will come back, bringing with them new skills and mentalities.

“I don’t really see it as a tragedy. I see it as a part of this period of history and also as part of life,” he said while deploring the exploitation being carried out by people traffickers. When pressed further, he added he does not necessarily see the exodus of Albanians as bad.

​​“I think it is a period of time that the country suffers for human resources from this phenomenon, brain drain, but on the other hand, when you see the history, everyone, every country has gone through this kind of trance, and in the future, it will be beneficial,” he said.

But the PM explained that when people leave, they bring back a new perspective, and this is a positive.

“These people return with a different mentality, they come with some experience, and they open enterprises, they do things differently, and they make successes,” he said. But many in Albania blame him for the high numbers, noting that a large number have left while he has been in office.

When I interviewed opposition leader and former prime minister and president Sali Berisha, he said the reason people are leaving is because of corruption and crime under the current administration. While vowing to get back into power in the upcoming local and then future general elections, he said that their party is working on connecting with those in the diaspora.

“We are trying to extend our links not only with well educated people in Albania, but also to people in the UK, in Germany, the United States, France and everywhere. It's a huge potential,” he said.

He added that the so-called “brain gaining” project will be “one of our most important.”

But civil society maintains that the only way to stop people from leaving is to push for a radical shift in society and politics, away from the ghosts of the past. One where the rule of law, freedom, prosperity, and opportunities thrive, supported by strong infrastructure and a higher quality of living.

With a new year just days away, uncertainty continues to reign. War simmers at the borders of Europe, tensions continue to rise between Kosovo and Serbia, and those in Albania, one of Europe’s poorest countries, continue to feel the pinch of the economic crisis. While the country’s migratory waves have ebbed and flowed for decades or even centuries, the reality is Albania cannot afford to keep losing human capital.

On the ground in Tirana, tangible mitigation plans are few and far between. Meanwhile, the UK has put forward a plan which will penalize all Albanians, rather than just those who seek to abuse the system.

Last week, the UK government announced a five-point plan which will essentially make it impossible for Albanians to seek asylum in the country. It will also make the review process much tougher, which, while necessary to weed out unfounded cases, could also steamroll the cases of the vulnerable.

While the plan foresees stationing British border guards at the Albanian airport, stepping up sea patrols, and creating a task force to scrutinize every application, there is little mention of getting to the root of the problem in Albania or dealing with traffickers themselves.

This means that for this small Western Balkan nation, a tough future lies ahead punctuated by the fall out of brain drain, an aging population and a declining birth rate. 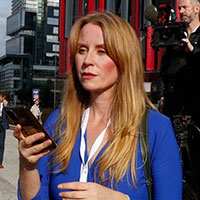 Alice Taylor is a British-born journalist living and working in Tirana, Albania, since 2017. She writes for Exit.al/en and is the news editor and Albania and Kosovo correspondent for EU politics and policy media EURACTIV. In addition, she covers the region for DW, BBC, and occasionally The Times, as well as media such as The Lead, Vice, Open Democracy, and Byline Times. As well as creating content, she was elected to the board of the Albanian Ethical Media Alliance for the second term in 2022 and regularly talks in local and international panels and at educational institutions on media, ethics, and journalism in the current climate. She started her career in Malta as a political and social columnist before working with the award-winning investigative platform The Shift News. Author photo: Jutta Benzenberg