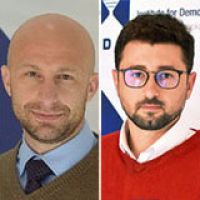 Alban Dafa is a researcher of governance and security at the Tirana-based Institute for Democracy and Mediation (IDM). His work focuses on Albanian security and defense institutions and EU accession-related governance reforms. Before joining IDM, he served in the Albanian Naval Force as a patrol boat commander, navigator, and junior hydrographer. He is a graduate of the United States Naval Academy and a Chevening alumn. Redion Qirjazi is a Program Manager and researcher on security affairs. His work focuses on defense, terrorism, conflict resolution, violent extremism, public sector integrity and good governance. Redion is a graduate of the United State Military Academy (West Point) and has previously served as an officer in the Albanian Army for 7 year, to include a combat tour in Afghanistan. He is a Rotary Peace Fellow, and a Chevening Scholarship recipient through which he graduated with a M.A. in Applied Security Strategy from the University of Exeter.

COVID-19 in Albania: Democratic Governance Put to the Test

Alban Dafa, Redion Qirjazi COVID-19 was met with a quick response by the Albanian government, yet, it presented opportunities for the Executive to expand its power by sidelining criticism, dominating public perception, disrupting institutional checks and balances, and...