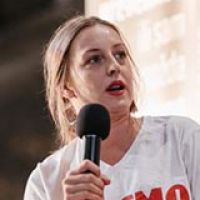 Bojana Guberac is a journalist for the Lupiga.Com portal, which has been implementing the project "A Step Further: Challenges of European Croatia" for the past four years. In her work, she is dedicated to issues of human rights, hate speech and violence against women. As a freelancer, she also writes for the CroL and Women and Media portals. She worked as a journalist of culture and news program on the county television Kanal Ri, on Radio Rijeka, Radio Sova and the radios of the Croatian Radio and Television, as well as on the portals Novi list, Riportal and Kvarner News. In 2019, she created a performance that deals with the secondary victimization of women victims of violence, from which the experimental film "Scarier than a Fist" was created. In her spare time she writes poetry.

In a society divided over the vaccine, legal disinformation are sowing fear of fascism

Bojana Guberac If the pandemic has taught us anything, it is that in Croatia there has never been a stronger distrust in the system and, what is even worse, in the profession. We are used to have the politicians lie to us or, as it is popular in Croatia lately to say,...

Bojana Guberac If the verbal attacks on journalists and on media, made by the most powerful people (including the President) in the country as well as the pressures from the Prime Minister do not stop, I am afraid that Croatia is moving in the direction of Hungary,...

Bojana Guberac The case of Mara Tomasevic, which was all over the media in recent years, clearly depicts how the Croatian judiciary, despite recent triumphs of civil society, continues to protect perpetrators – especially those in positions of power. However, the...