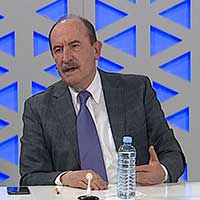 Mirce Adamcevski is a longtime journalist and media professional. He graduated from the Faculty of Technology in Skopje. He spent most of his professional life (1979-2004) in "Nova Makedonija" as a journalist, editor, correspondent from Moscow (in the period 1993-1999) as well as editor-in-chief (from 2002 to 2004). He is the author of the publication "Macedonian-Russian Cooperation" (January 2003). One of the founders and first editor-in-chief of the magazine for construction, architecture, ecology and investments "Porta 3". From 2006 to 2008 he was the President of the Broadcasting Council of the Republic of Macedonia. He is a member of the Appeals Commission at the Media Ethics Council of Macedonia.

From now on, there may be talk of the disappearance of freedom of speech, but hate speech never...