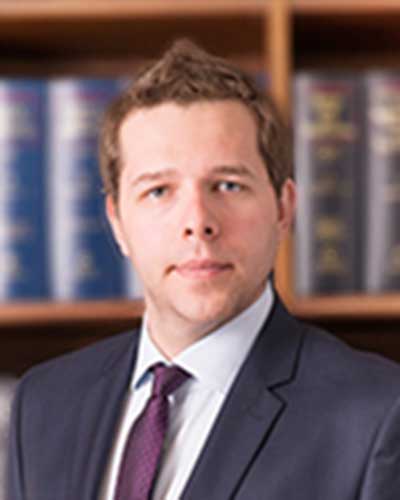 Bulgaria’s vaccination program can only be deemed a fiasco. It can be attributed to a number of factors — poor organization, incompetence, and potential conflict of interest. In turn, the drama, which unravels now, is not surprising. Bulgaria is second in the EU in deaths per capita on a seven-day rolling basis and last in the EU by number of administered vaccines per capita.

In a recent opinion piece by the editorial board of the Wall Street Journal, the EU’s Covid-19 vaccine rollout has been dubbed a fiasco. However, if one looks at EU’s poorest and most corrupt member Bulgaria, one will see a catastrophe. While EU’s vaccination response has been lukewarm, its vaccination allocation process appeared to be fair to all member states. The EU allocated pro rata the vaccine doses it had secured based on the population of each member state. Nonetheless, Bulgaria did not accept all its allocated doses – why did that happen? Was it putting a price tag on Bulgarians’ lives? Was it a conflict of interest or a case of pure incompetence? Let’s take a closer look!

The vaccines available in the EU

The EU has secured 2.6 billion vaccine doses from 6 different producers as of March 16th, 2021 and 4 of them (1.86 billion doses) have been approved for use within the EU. There are also at least 4 more vaccines that have been approved for use in at least one country in the world. There are 4 main types of vaccines – mRNA, adenovirus (i.e. viral vector), protein-based and vaccines based on an inactivated virus. The mRNA vaccines are developed and produced by Pfizer/BioNTech, Moderna and CureVac. This type of vaccine is based on a breakthrough technology “[that] had never been approved before the pandemic”. The adenovirus/viral vector vaccines developed by AstraZeneca, Johnson&Johnson/Janssen Pharmaceuticals, Gamaleya’s Sputnik V and CanSino Biologics use a relatively new approach, which has, however, been tested already in the fight against Ebola. The protein-based vaccines of Novavax and Sanofi-GSK are still in the late stages of development. The most traditional vaccine method is the inactivated virus used in China’s state-owned Sinopharm, China’s Sinovac Biotech and India’s Bharat Biotech.

A question of price

While the exact prices the different vaccine suppliers have negotiated with the EU is probably the best guarded secret in the EU, various sources have estimated a range of prices from public and semi-public data. In the following table you can view the information gathered by the Economist and the Financial Times. A promptly deleted tweet by the Belgian budget state secretary, Eva De Bleeker, reveals even more.

It will be understandable for a price-sensitive member to allocate the maximum possible amount to the cheapest doses, but does it make sense to take full allocation and no allocation to two equally priced vaccines, which at the time of allocation were still undergoing review and there was no certainty if none, one or two of them will be approved?

While the mRNA vaccines appear “overpriced” compared to the other possible candidates, they were the first ones to be approved and rolled across the continent. The whole idea of having a large portfolio of different vaccines was to minimize the risk of a single vaccine having “issues” with logistics or performance and to also balance the average price of the whole portfolio. Why was it then that Bulgaria decided to ignore prudent practice and put all of its eggs in one basket?

Based on my calculations and the data available at this stage, I have created a rough picture of the price of the EU’s and Bulgaria’s vaccine portfolios. If EU’s portfolio cost about 11 EUR per dose, Bulgaria’s would be 9 EUR per dose. I guess the “savings” of 2 EUR per dose (18%) is indicative of the price tag the Bulgarian government had put on its citizens. These are the savings from choosing a portfolio with predominately cheaper vaccines instead of a balanced portfolio from all available vaccines.

How did a balanced EU allocation turn into a concentrated position in Bulgaria?

Bulgaria was allocated 1.55% (the index of Bulgaria’s population in relation to the population of the EU) of all negotiated vaccine doses. Firstly, Bulgaria did not request all of the available pro rata doses from Moderna and Pfizer/BioNTech. However, it requested almost the maximum of AstraZeneca. Bulgaria also requested all available quantities from Sanofi/GSK, which is not yet approved. Furthermore, Bulgaria refused all of the allocation to the Johnson&Johnson/Janssen Pharmaceuticals vaccine, only to be officially asked to renegotiate this decision and subsequently to buy allocation from the Swedish government.

It is estimated that Bulgaria “bought” in advance about 13 million doses (Table Allocation EU, BG). It then increased to 18.6 million doses. However, the EU has allocated to Bulgaria 42.8 million doses. Even with the lack of full transparency, one can see the underweighting of the two vaccines that were closest to approval (in December 2020) and the overweighting of the yet to be approved vaccines from Sanofi/GSK. Given an available balanced allocation – Bulgaria chose to concentrate on one vaccine close to 40% and select only one (prior to the deal with Sweden) of the available viral vector vaccines.

The lack of public information about the prices is somewhat understandable on EU’s level and correspondingly on a national level. However, the European Commission has been straightforward as it discloses information about the allocation process. In Bulgaria, by contrast, the whole allocation process is surrounded in mystery. The occasional dissemination of information to the public is usually associated with a major disaster or the appearance of perceived conflict of interest like with the case of AstraZeneca Bulgaria. 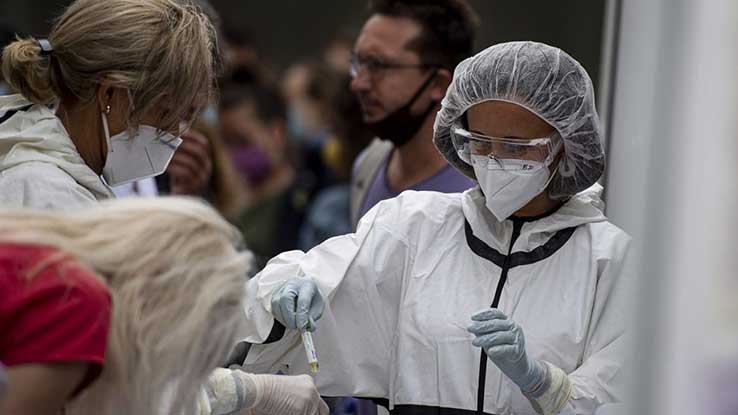 In an interview for the Bulgarian National Television on January 14th, 2021, the director of the National Center of Infectious and Parasitic Diseases stated that Bulgaria had ordered predominantly the AstraZeneca vaccine (01:43:30). The CEO of AstraZeneca Bulgaria is Zoya Paunova, one of the founders of Borissov’s GERB party who is also the mother of MEP Eva Maydell (Paunova), who is also from GERB. Free Europe Bulgaria and social activists have asked the question if the decision to favor the allocation to AstraZeneca is based on this relationship. It might be just an appearance of perceived conflict of interest, but this is enough to question the whole process of allocation of vaccines in Bulgaria. The succession of concerns about the safety of the AstraZeneca vaccine which emerged in international media only fueled further anger among citizens and contributed to a crisis of trust in the government’s program.

From my calculations in the (Table Allocation), it seems that the original “plan” of the Bulgarian government was to order equal parts from the protein-based and viral vector vaccines - 40% each and 20% from the mRNA vaccines. I had to exclude the Novavax from the calculations because there is still no contract with them. It is interesting that the original plan was to have all of the viral vector vaccines from one single provider - AstraZeneca. Following the request from the EU and the deal with Sweden, the new allocation “seems” more balanced with 33% allocated to each type of vaccine. However, on an EU-wide level the allocation is markedly different with 50% allocated to mRNA, 30% allocated to viral vector and 20% to protein-based. This allocation is current as of March 2021 and will probably change with the introduction of new information. The allocation is possibly based on the fact that the mRNA vaccines were the first to be approved for use across the EU, while the protein-based vaccines are still in the late stages of development.

The Bulgarian vaccination strategy was unveiled on December 7th 2020 via a Decision 896 by the Council of Ministers. It seems that lack of planning and organization was the norm from the beginning. The explanation that the Minister of Health gave the parliament for the request for suboptimal allocation to mRNA vaccines was that those vaccines required specific needs that were unobtainable without proper organization. Were they admitting that the country was not prepared? At the same time, when the EU increased the allocation to mRNA vaccines, the Bulgarian government chose to allocate more mRNA vaccines. One observes chaotic choices which can either be explained with the fear of recognizing a conflict of interest, which many suspect, or with pure incompetence.

A series of conflicting decisions and contradicting information coming from the government did not help convince the citizens in the contrary. For example, a “Green Corridor” was thoughtlessly introduced and subsequently hastily closed. The idea behind the “Green Corridor” was to allow any citizen, even without appointment, to get vaccinated at certain vaccination centers. At the same time, citizens were “offered” the choice of preferred vaccine. The few who tried to benefit from this option were told that there was only one choice - AstraZeneca.

Where are we now? Last in vaccination in the EU!

With all that in mind, the results are clear - as of April 9th, 2021, Bulgaria was the 3rd country by total number of deaths relative to its population from COVID-19 in the EU. And as of the same date, Bulgaria was the 2nd country in the EU by new confirmed deaths per million people on a rolling 7-day average. At the same time, Bulgaria was the last in the EU in the number of vaccine doses administered per 100 people. But even hitting rock bottom does not seem to “rock” Borissov’s government boat.

Source: Our World in Data

Who will assume responsibility for this fiasco?

It is typical for the Bulgarian government to never ever assume responsibility for its actions and omissions and to find a scapegoat from somewhere else. Will this be the European Commission? Borissov has already tried that in the past. To me, it seems that the lack of organization, which seems to border pure incompetence, and the complete failure of proper communication with Bulgaria’s EU partners and the Bulgarian citizens are at the center of the disastrous vaccination campaign in Bulgaria. 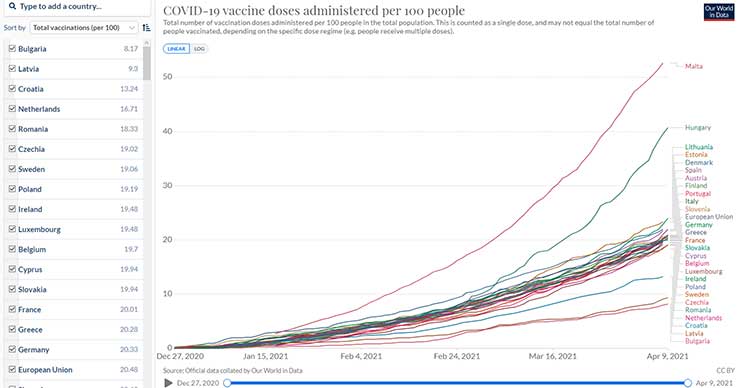 Source: Our World in Data

Of course, Borissov claims that he manages the pandemic “in the best possible way” and Foreign Minister Zaharieva contends that “the world is talking about a Bulgarian model of crisis management”, but such messages conceived for domestic consumption can easily be disproven with data. What Bulgaria needs now is a better and more qualified task force, which can rise up to the challenge of addressing the shortcomings of the current program.

Vladimir Atanasov is a finance, risk and performance measurement consultant, and FX trader. He earned his Bachelor’s degree in International Relations from the American University of Rome and subsequently earned his Master’s degree in Finance from the London Business School. He earned the CFA® Charter in 2017 and subsequently become a CAIA® Charterholder in 2018. In 2019 he had also earned the right to use the Certificate in Investment Performance Measurement™ designation. From 2020 he is also a Financial Risk Manager - Certified by the Global Association of Risk Professionals. CFA® and Certificate in Investment Performance Measurement™ are registered trademarks owned by CFA Institute. CAIA® is registered trademark owned by Chartered Alternative Investment Analyst Association. FRM® is registered trademark owned by Global Association of Risk Professionals (GARP).