(Dis)Integration of Bosnia and Herzegovina in the European Union 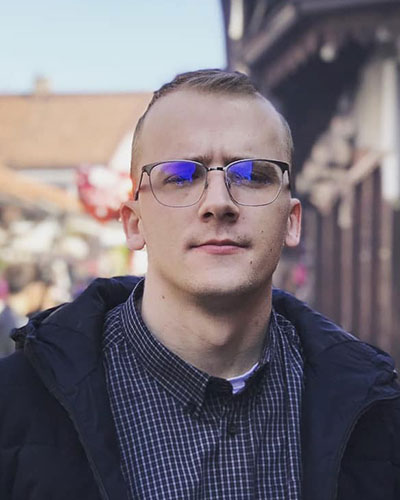 We cannot expect Bosnia and Herzegovina, or any other candidate country, to join the EU until we develop antibodies to the virus of corruption, crime and nationalist policies that still paralyze Western Balkans.

History has shown that, over the centuries, people have strived for progress and change, for an ideal type of government, governance and a more equitable distribution of power. However, in today's technological-technocratic world, with all these major global problems that include climate change, migration and the outbreak of COVID-19 pandemic, the political structure of the societies around the world does not leave much room for utopian and idealistic projects.

Based on all this, the progressive movements that strive for profound changes have not been appearing for a long time. On the contrary - the context in which we have lived for the last 20 years has given rise to a number of populist ideas from both political spectrums. Indeed, in most democracies the basic human and democratic rights are guaranteed, but the worsening living standards and the loss of social rights, combined with pervasive corruption and the growing influence of the political elites opens up a lot of space for political debate that necessarily seeks change - but those changes do not necessarily lead to better.

The countries of the Western Balkans are struggling with all the above-mentioned problems: the citizens want to have ideas that will lead them to integration into the free world. However, the current political situation in the country, in the region and in the world sends a clear message to the citizens that for now they can only dream of a prosperous country.

In the meantime, we will witness the Balkan reality, in which it is possible for the leaders of political groups to satisfy their special and selfish interests with cheap political, populist and, above all, primitive moves, regardless of the interests of the citizens. In such a reality, in this political mud, all hope for change and progress is lost. In view of that, the dream of the individual striving for a country of prosperity becomes a nightmare and is slowed down by the processes and bad political management that force him to live a better life in some other Western democracies.

The bravest in realizing that dream, or those who are the most determined to escape the Balkan nightmare, are certainly the young people. Their desire is clear and the voice of dissatisfaction is very noticeable. According to the BiH Youth Survey, the young people "mostly want to leave Bosnia and Herzegovina", with as many as 50% saying that "Germany is their first choice for emigration". Due to the bad political and economic situation, the young people do not believe in change in Bosnia and Herzegovina. If we look at other countries in the Western Balkans, we will see identical numbers. This is the reality that paralyzes any optimistic forecast.

(Dis)Integration of Bosnia and Herzegovina in the European Union

In the recent years, with strengthening of the entity and the special interests, this idea has been overshadowed by the political stagnation and deepened disintegration of the state. For years, the relations between Bosnia and Herzegovina and the European Union have been related primarily to gaining candidate country status. Bosnia and Herzegovina had a clear task: to provide answers to the questionnaire prepared by the European Commission. But it took more than two years to complete that task.

Key priorities for Bosnia and Herzegovina in the EU integration process

The most recent report of the European Commission that examines the progress of the country in relation to membership criteria, shows that there is no real progress in Bosnia and Herzegovina.

When it comes to the political criteria, Bosnia and Herzegovina had limited progress in some segments, while there was no progress in most of the political criteria. The report states: "For most of the reporting period, the Parliamentary Assembly of Bosnia and Herzegovina was blocked for political reasons, resulting in non-acceptance of the law, and the Council of Ministers acted with a technical mandate until a new Parliament was convened, which happened in December 2019." 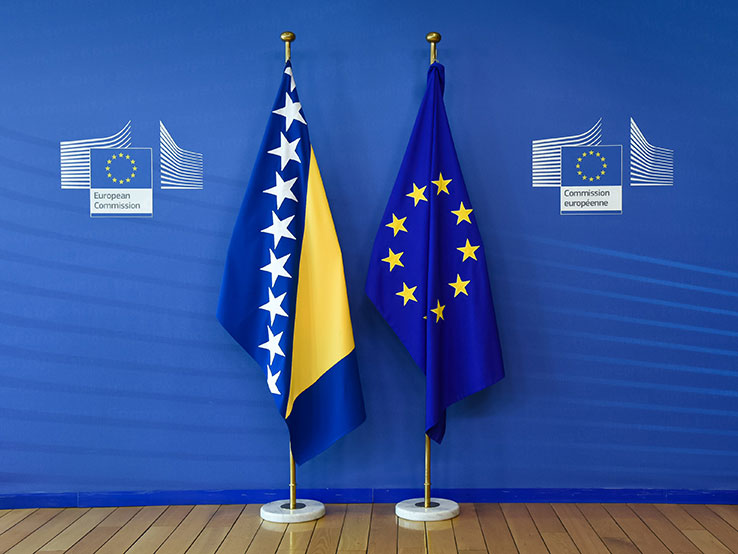 The problem is further exacerbated with the Constitution of Bosnia and Herzegovina, which "is still in conflict with the European Convention on Human Rights (ECHR)", as confirmed in the Sejdic-Finci judgment and the subsequent judgments. The report further notes that there has been no progress in "improving the electoral framework in line with the European standards or ensuring transparency in the financing of political parties". No progress has been made on "providing support for civil society enabling environment". Bosnia and Herzegovina is "at an early stage and at a certain level of readiness in preventing the fight against corruption and organized crime".

When it comes to administrative criteria, "Bosnia and Herzegovina is at an early stage of public administration reform (PAP) and has made no progress in providing a professional and depoliticized civil service, as well as a coordinated approach to policy-making throughout the country." The same goes for the readiness in the area of ​​justice, and the EU report concludes that "no progress has been made in this area". The obstruction of the judicial reforms by the "political actors and within the judicial system itself, including the poor functioning of the judiciary system endangers the civil capacity to exercise their rights and thus hampers the fight against corruption and organized crime."

Bosnia and Herzegovina has made the most progress in the economic criteria, where "limited progress" has been made. In the reporting period, limited or no progress was made in various chapters of the EU law. "Bosnia and Herzegovina is generally at an early stage... of readiness to take on the obligations of EU membership and should significantly speed up the process of alignment with the legislation and implement the relevant legislation."

Can the dream become reality?

We need demands for reforms in the areas of justice, rule of law and fight against organized crime and corruption for our own sake, not just because they are a condition for further EU integration. It is realistic to expect progress in areas such as the economy, fight against corruption and strengthening of the national institutions.

According to the lectures of Irfan Softic who is an attorney at law by background and has extensive work experience in economics, "the corruption in Bosnia and Herzegovina is a common law." Softic believes that: "There are good and bad customs. The corruption is a bad habit that is hard to fight.” The Corruption Perceptions Index (CPI) of Transparency International 2020 ranks Bosnia and Herzegovina (BiH) among the countries in the world where the state of corruption is becoming worse and worse.

The institutions of Bosnia and Herzegovina are paralyzed by corruption, they have given priority to the "unscrupulous looting of public funds, to the detriment of providing adequate health care". The entire period of the pandemic was marked by non-transparent and unresolved procurement of medical equipment. This is just one of the examples the report addresses; Bosnia and Herzegovina does not have "an appropriate anti-corruption policy or strategy, and the legal framework has been waiting for years for a complete and comprehensive reconstruction, which is unequivocally emphasized by the European Commission among the 14 priorities for obtaining candidate status".

The public opinion poll "The Attitudes of Citizens Towards EU Membership and the European Union Integration Process", conducted by the Directorate for European Integration of Bosnia and Herzegovina in October 2020, showed no significant differences compared to the findings of the April 2019 survey. In the event of a referendum on EU membership, 75.6 percent of respondents said they would vote in favor of joining the EU. Citizens from all parts of Bosnia and Herzegovina support membership of the country for the same reasons – mostly because they believe that this is a guarantee of lasting peace and political stability. The next reason is the increased freedom of movement of people, goods and capital.

The same reasons were most often cited in 2019, while in 2018 was the year in which the issue of infrastructure improvement was raised more often. There are no significant differences in the reasons why citizens of all parts of Bosnia and Herzegovina do not support EU membership. By far the most common reason is the fear of rise of the costs of living and taxes. The citizens of Bosnia and Herzegovina usually think that the fight against corruption is a reform that needs to be implemented in order to improve their daily lives. This was the most common answer in the previous year, while in 2018 other reforms had greater priority compared to 2019 and 2020.

Post-COVID-19: The future of integration

In recent years, in addition to the insufficient transformation of the political systems of the Western Balkan countries, the European Union also faces other challenges. The growing right-wing populism, the aftermath of the economic crisis that devastated the world in 2008, the migrant crisis, Brexit, etc. have led to emergence of new nationalists trying to minimize the supranational political principle. On top of that, COVID-19 happened in the end, which closed all countries in their national borders.

Since 1996, the European Union has invested more than 3.5 billion euros in reconstruction, public administration reform, rule of law, sustainable economy, agriculture and other key areas in Bosnia and Herzegovina, making it the largest single donor in the country. The European Union will remain main partner of Bosnia and Herzegovina even after the COVID-19 pandemic but that does not mean automatic support for the EU integration processes. Obviously, given the situation, such support will be lacking some concrete form until the authorities of the country show results in all the priority areas set by the EU.

We cannot expect determination from the EU if we do not show our own determination to face the key problems in the country. Until then, the citizens of this country will remain incarcerated with the PCR tests within the state borders. Similarly, the 14 tasks set by the EU represent a kind of country-specific PCR test. Finally, we cannot expect Bosnia and Herzegovina to join the EU until we become resistant to the virus of corruption, crime and nationalist policies that paralyze the country.

This blog is published as part of the regional blogging initiative “Tales from the Region”, led by Res Publica and the Institute of Communication Studies, in partnership with Macropolis (Greece), Lupiga (Croatia), Sbunker (Kosovo), Ne Davimo Beograd (Serbia), Analiziraj (Bosnia and Herzegovina), Pcnen (Montenegro), and HAD (Slovenia). 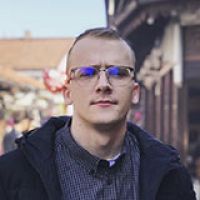 Mahir Sijamija has a Master's degree in Political Science from the University of Sarajevo (2018). He currently works as an associate at the Media and Policy Analysis Centers in Sarajevo and is a junior author on the Media Watchdog platform Analiziraj.ba. He was hired as Project Coordinator at the INFOHOUSE Foundation on the USAID Youth and Reconciliation Project. He has previously worked as an external associate for the Faculty of Political Science, University of Sarajevo and UNICEF BiH. He has also been involved in various research projects that stand out for International Republican Institute, Humanity in action, RRPP, UN, CREDI, Media Center and Albany Associates. He is a member of the UNESCO Advisory Group on MIL in BiH, a Senior Fellow Humanity in Action BiH.