Repurposing abandoned objects: a chance for a better quality of life

The text is the winner of the competition for best blog "Do you have a better idea?" organized by Res Publica and the Institute of Communication Studies. 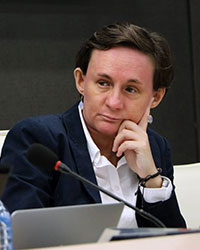 The models of functioning we have seen so far have proven to be selfish and oriented exclusively towards the profit of small groups of individuals. It’s time for a real change.

The urban model of Skopje and other larger Macedonian cities gives impetus to building construction, creating densely packed spaces in the interest of profit, at the expense of citizens’ quality of living. Any available space, especially if it is located in the downtown area or near the city center, is occupied by construction activity, covered with concrete or torn down and rebuilt. The concept of profit brought by the construction business leaves no space or chance for converting public and urban spaces. There is no chance for renovation of old and vacant buildings, factories and abandoned premises, other than demolishing the buildings and building new ones in their place. The reason is that newly built buildings bring more money, at the same time adding to air pollution because the construction season lasts all year round.

Utilizing abandoned public buildings that are the urban and cultural heritage of every city, via repurposing, instead of building new ones, is poorly accepted by the Macedonian public, because it is deeply rooted is our consciousness that new is better than old. This mantra is imposed by the consumerism-stimulating establishment that sees everything through the prism of profit. It is additionally supported by local authorities, because taxes on new buildings bring in more revenue than from reconstruction and conversion of existing buildings.

This narrow-minded approach significantly contributes to increasing the pollution of cities, lowering the quality of life and further destroying public green areas that are intended for citizens, and not for the construction business. One point that is vastly disregarded, yet has an impact on society, is the creation of ghettos in larger cities. This also adds to social stratification and increasing poverty.

This trend can be avoided by reconstruction and conversion of abandoned buildings located in various urban areas that have a negative impact on the quality of life. Letting abandoned buildings waste away not only makes the environment unappealing for new inhabitants, but the decay of the building contributes to air pollution. In addition to this, there is the danger of a dilapidated building that is unprotected from theft and destruction.

The world is adapting and repurposing

Abandoned buildings and factories can easily undergo conversion, with the help of a plan that will be adapted to the needs of citizens. In eastern Romania, the city of Vaslui, which is close in size to Veles and Shtip, is an example of how abandoned buildings can be renovated and given a functional role. After a large number of citizens of this city switched to another type of heating back in the 1990s, dropping out of the public central heating system, only 6 active heating plants remained out of 27.

In 2007, with the support of the local self-government and funded by the European Union, the project for transforming these facilities into premises intended for providing rehabilitation services for marginalized groups, health support for pensioners and people from vulnerable categories and day care centers for children from socially disadvantaged families started. This project, which is still active, further contributes to reducing the marginalization of socially disadvantaged groups, as well as revitalizing areas that, through neglect, have become environmental pollutants and potentially dangerous to the environment. 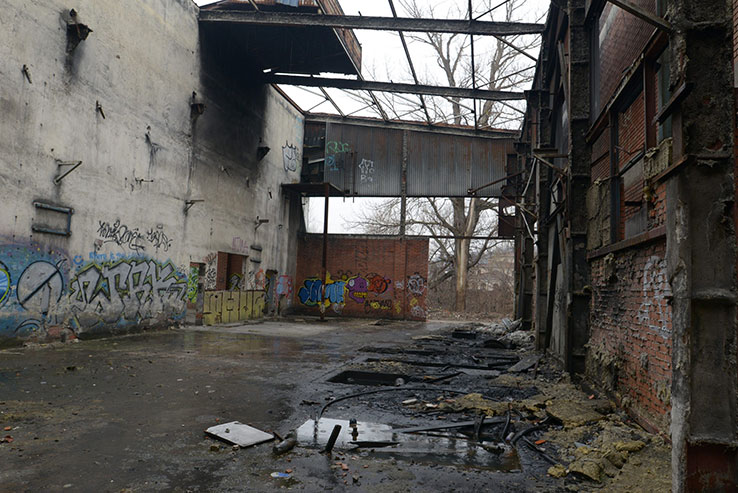 A slightly avant-garde, yet no less important example is the conversion of a 19th-century Gothic church in St. Louis, USA, into a skate park. This church had been abandoned for many years, until the local skaters’ association got organized in 2015 and obtained permission from the local authorities to convert it into a skate park, without damaging the interior. The same thing happened in Spain, in the city of Lanera in 2016, where a hundred-year-old church was not torn down, instead it was converted into a skate park.

There is also an example closer to us, in Slovenia, where the municipality of Kamnik decided to convert the premises of the monastery Mekinje for different forms of use. With financial assistance from the municipality and the European Fund for Regional Development, the premises were reconstructed without distorting the appearance of the cultural heritage. The premises are now used to hold trainings for civil society organizations, cultural heritage promotion, seminars and workshops.

These examples refer to both industrial and cultural heritage buildings. They themselves prove that not everything should be demolished, instead, with a little effort, it can be functionally repurposed.

This 2019 Rulebook uses the principle of circular economy, which is a closed system of utilization, recycling and reusing available resources (water, land, air, plastic, compost, solar energy). The Rulebook provides examples of locating and identifying abandoned buildings and offers models and proposed solutions for how certain municipalities have regulated the situation, in order to reduce the number of abandoned buildings. Owners of premises that are larger than 500 square meters who are residents of the city of Zurich, are obliged to report to the municipality in case the space has been empty for more than a year. The municipality then decides how to repurpose and reuse the space.

Not only factories, institutions, housing buildings are abandoned, but also leisure facilities for which this rulebook provides examples and guidelines how to reuse them with the support of the local municipality and community. Apart from conversion ideas, a positive example is given of how the municipality can help in the financial revitalization of the facilities. Since 1990, the capital of Latvia, Riga, has seen between 500 and 1,000 abandoned buildings of various types. In 2016, the municipality decided to reduce the property tax between 25 and 90 percent for renovation and finding new use of abandoned buildings. This is of great importance, especially if the facilities are recognized and useful for education, sports, cultural and social activities.

Due to enormous congestion, the Tegel airport in Berlin was recently closed and a new one was opened on the southeast side of the city. This airport, which for the people of Berlin was a symbol of freedom during the Cold War, will be converted into a historical monument and a Development Center of the University of Applied Sciences will be established on the premises.

How can it be done in our country?

In our country, the interest for conversion of abandoned buildings is low. Facilities in Skopje that are identified as abandoned and can be repurposed are the Culture Center "October 11" in Cento, the sports hall "Partizan" in Karpos and the factory for non-ferrous metals "Kuprum" in the settlement Hrom. The idea of ​​the young people from the associations "Kulturno Eho" and "City Scope Skopje" is to convert the building of the old factory "Kuprum" into a student city. This would prevent new construction and pollution of the space and would bring the building closer to the people living in Hrom. 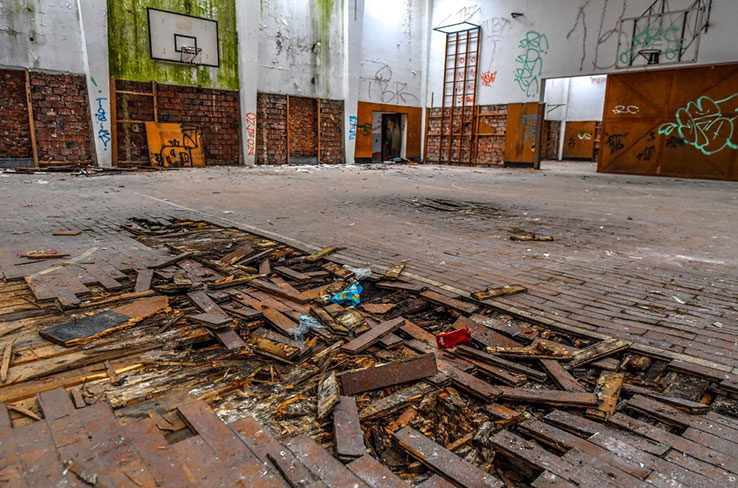 Other cities with abandoned buildings that can be repurposed are Kumanovo, Kocani, Kicevo, Ohrid, Struga and Bitola. I would also add the cities that were industrial centers and due to the destructive and dysfunctional privatization, were left with shut-down factories that can be converted. Veles, for example, has the space of the Smelter and the porcelain factory "Porcelanka", as well as the space of the abandoned city cinema for which there is still no idea on how to repurpose and use it in the interest and need of the citizens.

Abandoned buildings in the country can be easily converted through financial support of the municipalities, the Ministry of Environment and Physical Planning and the European funds to which we have access. We are not reinventing the wheel with this idea; we are rethinking the city. Reconstruction and repurposing of abandoned buildings reduces air pollution from construction activities that have proven to be major contributors to pollution. Furthermore, the socialization of long-alienated citizens will increase, which also contributes to reducing the possibility of creating ghettos and marginalizing certain urban settlements. Repurposing abandoned buildings opens a chance for the involvement of architects, urban planners, civil society organizations, educational institutions and non-governmental organizations with their own ideas and proposed solutions, taking into consideration the needs of citizens, joining forces to create a new city core for all.

Repurposing is not a grandiose innovation, it is a model that increases the sustainability of urban environments and contributes to the appeal of moving to a particular urban neighborhood, no matter the city. In a time of internet and unlimited possibilities, it takes will and ideas to implement such projects, but also pressure should be on city authorities by CSOs and the citizens themselves to give up the profit brought by construction activities.

With this approach, the city will be closer to its citizens on one hand, while the citizens will express a desire to contribute their ideas and participate in creating their own environment. Moreover, their awareness for the protection of the city and its ecological and economic development will increase. The principles of circular economy and direct democracy, which value environmentally-friendly solutions, sustainable economies and direct engagement of citizens in decision-making processes regarding living spaces, are the models we need for a sound future. The functioning models we have seen so far have proven to be selfish, non-functional and oriented exclusively for the profit of small groups of individuals. It’s time for a real change. 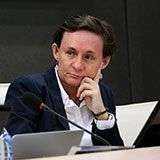 Sonja Stojadinovic was born in 1979 in Veles. She is a graduate political scientist at the Faculty of Law "Iustinianus Primus" in Skopje, where she received her master's degree in International Politics on the topic "Nonviolent struggle in politics: factors for success and failure." She works as a freelance author for the Croatian regional portals Lupiga and Bilten and is an activist for the left-wing Solidarity movement.