After the June elections in Serbia – Is anyone satisfied after 21 June 2020? 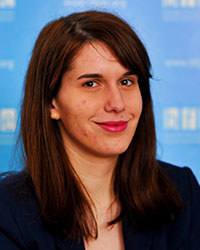 Following the June elections, the ruling Serbian Progressive Party has reason to be somewhat dissatisfied with the epilogue of this election cycle. The fact that there is no "real" opposition in the Parliament is something that will surely leave a mark on the superior result achieved by this party. The parties that advocated for boycott are currently reconsidering their political moves and regrouping their forces for the new challenges they will face in 2022. The real success of the boycott will be seen in the next two years.

In the new, 12th convocation of the Serbian Assembly since 1990, if we exclude the parties of the national minorities and if we consider the political options that have represented the opposition so far, only one party has essentially become member of the Assembly. Such results of the elections, which took place in the shadow of the global "Covid-19" pandemic, are certainly a rarity in the political life of Serbia and it seems that these elections are just a prelude to the upcoming election cycles, in which the opposition is expected to do more than just boycott.

A total of 21 voter lists participated in these elections, which is the largest number of participants in one election cycle since 2008. The threshold (census) for entering the National Assembly was reduced to 3% just before the elections (without proper public debate, public hearing or wider public discussion regarding the proposed changes), and this was not enough for more than three electoral lists to enter the Parliament (except the parties of the ethnic minorities). This led to a Parliament in which only 14 of the 250 MPs (SPAS and the minority SDA Sandzak) are not yet in coalition with the ruling party at any level of government, thus giving a clear picture of the state of democracy in Serbia - that only two lists would enter the Parliament - the lists of the ruling coalition, SNS and SPS and that there was no reduction of the census.

The situation of democracy in Serbia is certainly not something new, as the SNS has dominated Serbia's political life since the 2014 parliamentary elections, but this election cycle has made the situation obvious. Serbia now has National Assembly that will not be able to perform its basic function - control of the executive branch. It should be noted that a situation in wich a political option in Serbia achieves dominant support from the citizens is not something new. With approximately two million votes, the Serbian Progressive Party achieved the third best result in the history of the Serbian multiparty system, just behind the Socialist Party of Serbia (1990) and the Democratic Opposition of Serbia (2000), but in both cases the political parties entered the Parliament with options that were presented by the opposition streams in Serbia, which is not the case this time.

The election process went much smoother than expected. Of course, it should be noted that the winner of the elections was known even before they were held, and that the public was focused on other aspects of the process itself: the boycott of the opposition parties and the fact that the elections are held during a global pandemic. The election day itself was relatively efficient, in line with the measures for protection against Covid-19 recommended by the majority of the election boards. (According to the findings of CeSID observers that used 500 polling stations, in most cases it was noticed that the measures foreseen by the Crisis Headquarters were observed and they were in line with the safe voting withing a single polling station.)

However, the turnout, which ended at 48.93 per cent, did not seem to meet the expectations of either the parties that boycotted or the Serbian Progressive Party. It turned out that less than half of the voters did not support the ruling coalition, while the significant number of more than 3 million voters was not enough for the party that supported the boycott to be fully satisfied with its results. Such results are something that both sides will use as their successes, emphasizing the fact that the boycott is either successful or not, and that the elections are legitimate or not.

The new convening of the National Assembly of the Republic of Serbia, constituted on 3 August, includes only seven electoral lists (4 of which are minority political options), which is the lowest number of political parties/ coalitions in the Parliament since the establishment of the multi-party political system in 1990. As we have already mentioned, only one of the political parties (SPAS of Aleksandar Sapic), if we exclude the minority parties, has never been in a coalition with the Serbian Progressive Party. However, this political option showed during the election campaign that it’s potential for making coalition is very significant and that it would not be a surprise if they were a coalition partner of the SNS. In addition, with its first appearance in the parliamentary elections, this party managed to enter the Parliament, which is a great success. 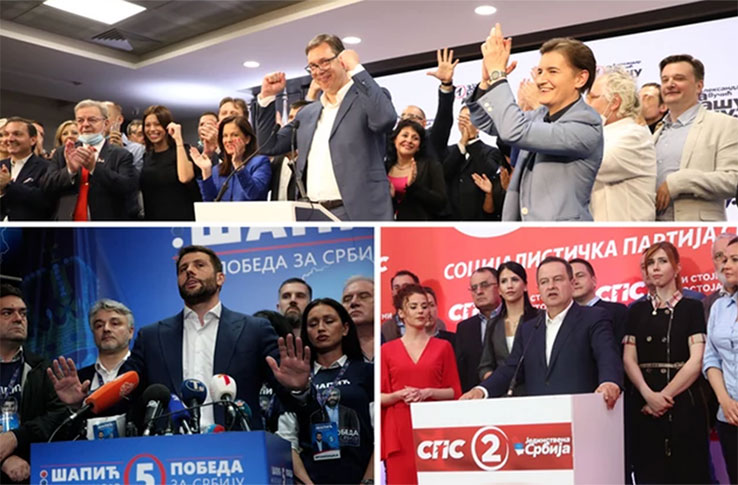 The Serbian Progressive Party confirmed its position as the strongest political party in Serbia, winning a total of 60.65 per cent of the vote (1,953,998). Since 2012 until today, this party is continuously growing in terms of voters and percentage of electoral support. With 188 members in the new Parliament, the Serbian Progressive Party has reason to be pleased with its election results, and the absolute majority they won allows them to establish a new government of Serbia by themselves. However, it seems that this will not happen. In their media appearances, the party officials clarified that the SNS would still seek a partner in the parties of the ethnic minorities that reached the census, as well as among the remaining two political options that entered parliament (SPS-JS and SPAS). In addition, the SNS has several other reasons for certain level of dissatisfaction.

First, the fact that there is no "real" opposition in the Parliament is something that will surely leave a mark on the superior result achieved by this party. Either of the two political options that remain in "opposition" (SPS-JS or SPAS) is not perceived by the public as a real counterweight to the ruling party (either because of the obvious difference in votes, or because they were willing to cooperate with the SNS party). Another element of discontent may be the infamous 50 per cent turnout that was not achieved, despite the fact that the boycott campaign not being properly visible. Of course, the reasons for the slightly lower turnout can be found not only in the boycott of the opposition, but also in the fact that the elections took place during the global pandemic. These parliamentary elections showed that the pooling stations saw 10.54 percentage points less voters compared to the thirty-year average in Serbia (which is 59.47 percent), and 7.77 percentage points less voters than the average turnout seen since the year of 2000 until today.

The Socialist Party of Serbia has a reason to be and not to be satisfied with the election results. The party won significantly less votes than in the previous election cycles, but still thanks to the fact that fewer parties entered the Parliament it won 3 more seats. Of course, in order to properly assess the SPS results, we must wait for the decision on the new coalition partner of the SNS.

The ethnic minority parties made the most of the changes in the legislative framework and achieved historical results. The Union of Hungarians in Vojvodina will have 9 MPs in this Parliament (for the first time since 1990), the Albanian coalition three MPs, while the Bosniak political options in Parliament will have seven MPs (SDA Sandzak - three MPs), while the coalition ’academician Muamer Zukorlic - Only right - (SPP) - (DPM)’ will have four seats.

The biggest losers in the June elections appear to be the opposition parties that decided to participate in the elections. While the pro-boycott parties took advantage of the fact that half of the registered voters did not go to the polls, the parties that did go to the polls (participated in the elections) failed to achieve the desired results and achieve the 5% reduced census. The biggest surprise of the elections is the result of the Free Citizens Movement, which was seen in the Parliament just before election day. However, this political option managed to collect only 1.58 percent of the electorate.

On the other hand, the parties that advocated the boycott are in a moment of reconsidering their political moves and positioning their forces for the new challenges they will be facing in 2022. The real success of the boycott will be seen in the next two years. The opposition is facing a difficult task and, in circumstances of the absolute majority and control the Serbian Progressive Party has, it should establish an appropriate network, mobilize the citizens and offer a completely different vision to the citizens in order to have a real chance at the elections in 2022.

In the end, as the winner of these elections was clear from the very beginning, it seems clear that in two years from now we will have much more important elections when it comes to political changes in Serbia (2022 is the year of presidential elections and the local elections in Belgrade). In those two years, Serbia will face a number of challenges (economic crisis caused by the "Covid-19" pandemic, negotiations with Prishtina and resolving the status of Kosovo and Metohija, relations with the countries in the region, the European future...). The ability of the current ruling party to deal with them will certainly give a true overture before the presidential elections and the Belgrade elections that are ahead of us.

However, if it wants to achieve a better result in the future election cycles, the opposition must act in a much more coherent manner and must outreach its ideas to all citizens across Serbia. On the other hand, the Serbian Progressive Party faces a completely different challenge. The triumph it achieved carries a huge responsibility, especially given the aforementioned challenges Serbia is facing. 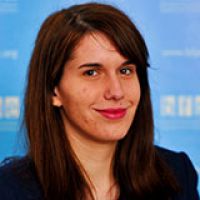