The political events of 2022 indicate that perhaps 2023 will be the year when Serbia's already difficult European path is blocked.

When Aleksandar Vučić came to power ten years ago, he presented himself to the country and especially to the region and the West, as a politician who had experienced a catharsis i.e., a conversion, and who went from being a warmonger and an ardent chauvinist on the football stands to, so to speak – a Euro-fanatic.

In fact, the promotion of his pro-European policy started even a few years before that, when part of the Serbian Radical Party (SRS) disassociated from its long-time leader, Hague prisoner Vojislav Šešelj, and formed the Serbian Progressive Party (SNS), with him and Tomislav Nikolić at the helm. Undoubtedly, the government of Serbia at the time, led by the democrat Boris Tadić, along with some Western countries, helped them in their “separation.” They wanted to create a strong, conservative, but unequivocally pro-European party. It was, in fact, a part of the Serbian nationalists, who generally have Russophile tendencies, turning towards the west.

They even dreamed of a two-party system, in which the progressives would be on the right, and the Democratic Party (DS) would be left of center. The common denominator would be an accelerated path to Europe.

After taking the throne, Vučić made moves on the internal and foreign policy front that lulled the West into the belief that they were not wrong to play the card of the former Minister of Information in Milosevic's government. The Brussels Agreement was signed in 2013, which rounded off the institutional system of Kosovo and somewhat relaxed the relationship between Belgrade and Pristina. Regionally, Vučić sent pacifying messages, so he was perceived as a factor of stability in the Balkans. In addition, inside the country, he started the so-called crackdown on corruption and crime, and the powerful tycoon Miroslav Mišković was also arrested.

The latter made him enormously popular, and he was perceived as Elliot Ness among the citizens. Even those from neighboring countries expressed regret in some polls that they did not have "such a politician.”

On the other hand, however, things were going in a completely different direction. It was clear that inside the country, the most powerful politician, regardless of his position (from 2012 to 2014, he was the Deputy Prime Minister, then until 2017, the Prime Minister, and after that - the President of Serbia), was establishing an autocratic system, which was initiated by placing the secret. Thereafter, an anti-democratic system of strict media and judiciary control was established. These levers of control then helped him destroy other institutions and political opponents.

From a position of enormous power, with the support of the West, he not only destroyed or "tamed" the opposition and the criticizing public but also his political partners and even his long-time political associate Tomislav Nikolić, whom he completely marginalized and practically forbade him to run for president of Serbia in 2017.

The frequent elections that were organized in the past decade were teeming with irregularities and were not free and fair. European reports and observers noted the negative trends, but too mildly, and were often very distrustful of critics of Vučić’s regime. Thus, on Vučić's path to the European Union, Serbia was left without free media and freedom of speech, independent institutions, and free elections, i.e., without democracy. And yes, those who were arrested in the fight against corruption were never convicted. Starting with Mišković, who today is a free, powerful, and cooperative businessman.

Calls for peace and outbursts of hate

On a regional level, the situation was paradoxical. While Vučić was sending messages of reconciliation, his closest associates were spewing hatred towards neighboring countries and peoples. The media, which are unequivocally and openly in the service of his regime, especially numerous print tabloids, once again picked up the war-mongering rhetoric from the ‘90s - and once again, everything was "bursting" with "Ustashas,” "Balijas,” "evil Shiptars," "foreign mercenaries" and " domestic traitors.” Although he swore that Serbia was headed towards the EU, the public rhetoric was predominantly anti -European, leading up to the present day, when, as never before - not even in the ‘90s - the European idea been less appreciated or less popular in Serbia. 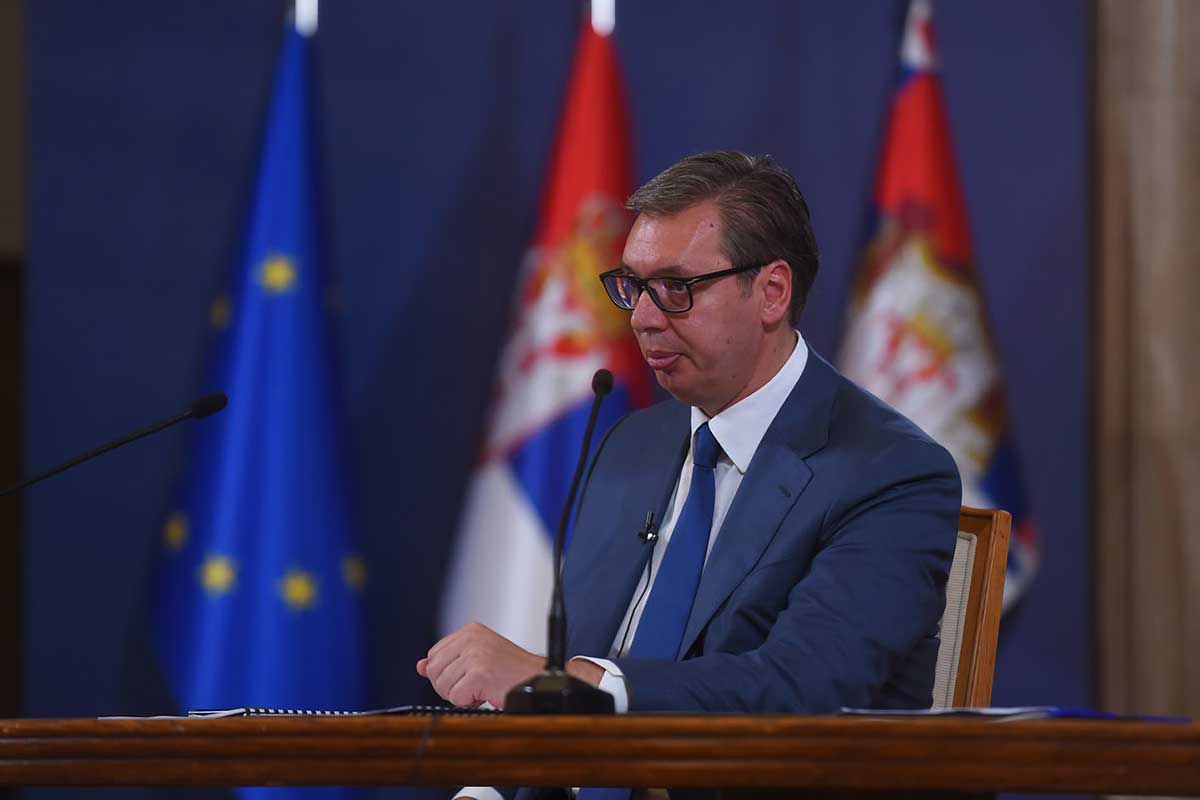 At the same time, a personality cult was created not only for Aleksandar Vučić but also for the President of Russia, Vladimir Putin, who became an honorary citizen of many places in Serbia. Ultra-nationalists - some of whom got their hands bloody in the 1990s - got powerful positions in the hierarchy and convicted war criminals became prominent members of the SNS. It is interesting that, in European documents, it wasn’t until 2020 when it was stated that an anti-European campaign is being conducted in Serbia, eight years after the process started.

European integration experts claim that it was the strategy of Vučić’s regime: the ten-year anti-EU strategy made the citizens think what they are thinking, so now the regime has the easy option to hide behind them and abandon the European path at any moment, substantively or even formally. Up until one moment, the government had political and financial benefits from that path, yet after that point it can only cause damage. Namely, the path towards EU entails, among other things, combatting crime and corruption, which were and remain "conditio sine qua non" of Vučić’s regime.

It would be wrong to say that, in the last ten years or so, the official Serbian policy has not successfully stricken a balance between Russia and the West. Russia pursues its interests in Belgrade, and the West does not want Serbia to completely turn to the Kremlin. The majority of Serbian opposition and the public, who are nationalist and Russophile and whom the regime actually carefully cultivates, also contributed to getting to this comfortable position. Vučić sent a message to the West: It’s either these guys or me! And that, for the most part, yielded results.

Although official European reports noted year after year problems in freedom of the press, the rule of law, and the fight against corruption - it is unequivocally clear that Vučić still had support from the West.

The West responded to the serious social and political problems in Serbia by supporting "dialogue processes" in Serbia and "strengthening institutional capacities", ignoring the fact that dialogue in society has been abolished thanks to the regime and that the institutions have been rendered meaningless by the establishment of an autocratic system, where all decisions are made by one center of power, completely transparently. Vučić is a politician whom Europe looked up to, and this was especially visible when Angela Merkel and her CDU party, which is a partner of Vučić's party in the European People's Party, were in power in powerful Germany.

And then Merkel went into political retirement, and the social democrats, liberals, and greens took power in Germany, and they were not inclined to support the obvious collapse of democracy in Serbia nor to turn a blind eye to the deteriorating regional relations in the Western Balkans, in which Serbia plays a key role. Then Russia committed an act of aggression against Ukraine, which put Vučić in a very awkward situation.

There is enormous pressure from the West for Serbia to align its foreign policy with the EU, that is, to introduce sanctions against Russia and make a serious departure from the Kremlin. Also, pressures are growing to solve the problem of Kosovo, as well as to create the conditions for freedom of expression and to start a decisive fight against crime and corruption. In the latest Report on Serbia's progress, the deterioration of Serbia's political relations with countries in the region is mentioned, and Croatia and Montenegro are mentioned in particular.

It seems that, even if it wanted to, Vučić's government could not fulfill EU's demands. A more significant determination against Russian aggression and introduction of sanctions against the Kremlin would seriously shake this regime, considering the dramatic Russophilism in the country. Recent events, such as the allocation of national frequencies exclusively to the regime's propaganda TV stations and intensified attacks on independent media and journalists, show that the regime will not give up a key instrument of power - the endless control and manipulation of the media.

We have already said that dealing with crime and corruption is not realistic either, for the simple reason that Vučić's government - and this is shown by the almost daily affairs revealed by research centers - is steeped in crime and corruption. The latest political problems in Kosovo indicate that the chances for normalizing relations with Pristina are slim to none, and the nationalist statements of Vučić himself and other officials are making the already bad relations in the region worse.

The appointment of extreme nationalist Aleksandar Vulin to the head of the powerful Security and Information Agency (BIA) is a big slap in the face for the West. Vulin is unequivocally a man close to Moscow, who boasts of very close relations with high-ranking Russian officials and is the author of the phrase "Serbian world,” based on the phrase "Russian world,” which is the basis of the Great Russian idea hidden behind the Russian aggression against Ukraine. "Serbian world" is a washed-up version of "Greater Serbia,” a political idea that is the main culprit for the wars and bloodshed of the 1990s. Experts believe that Vulin, in addition to promoting Russian interests, will also use the secret service for Serbia’s interference in the internal politics of neighboring countries.

Several affairs from the past (let's mention only the "Živaljević case" in Macedonia) show that the BIA was active in this in the earlier period.

All in all, Vučić responds to the pressures from the West with cynicism and indignation by fueling nationalism and xenophobia. The political events of 2022 indicate that perhaps 2023 will be the year when Serbia's already difficult European path is blocked.

It doesn't have to be official and formal, it's enough for Europe to say what it said to Turkey: Sit on the bench and rest for a while until you sort yourself out and think about what you want! And then things will naturally go bad for Serbia, primarily on the economic front: the inflow of investments will decrease, the trade deficit will increase, and various European funds will become inaccessible...

There is no doubt that the Vučić regime will respond to this in the only way it can: by producing political and security problems in the country and the surrounding area and by a new tsunami of separating from the West and Western values. 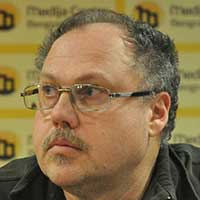 Nedim Sejdinović is a journalist and writer from Novi Sad. Author of prose and essay books, he collaborates with several media in the region. His main interests are monitoring and analyzing the Balkans' political, media, and cultural situations.