While mass graves with hundreds of victims of Russian aggression are found in the Ukrainian town of Izium, one of many Russian information and influence operations is underway in Slovakia. Igor Bratchikov, the Russian ambassador to Slovakia, is disseminating propaganda and disinformation about the desecration of the graves of Russian soldiers, which is adopted by pro-Kremlin proxies.

The village of Ladomirova is located in northeastern Slovakia. It has just over a thousand residents. It holds no specific economic or historical significance.

Except one. In 2014, the war cemetery of fallen soldiers from the First World War was reconstructed in the village. The Russian Embassy also financed the reconstruction. Because of shared history, especially during the world wars and later during the Soviet era, the Russian side has been dominant in similar activities in Slovakia.

In addition to more undesirable actions (spreading disinformation, propaganda, cooperation with anti-system actors), one can speak of a complex scheme of influence and information operations carried out by Moscow.

These have been present in Slovakia since at least 2014. The network of actors who, as part of hybrid operations, have crept under the reactionary threshold consists not only of alternative media but over time; the ecosystem has also been completed by politicians or representatives of state institutions.

In mid-September, news of further Russian atrocities in Ukraine circulated the world. After a five-month occupation by Russian forces, the Ukrainian army discovered the mass graves of more than 440 victims in the town of Izium. According to witnesses, Russian soldiers had detained anyone suspected of pro-Ukrainian views.

The situation showed that the massacre in Bucha was not an anomaly. Quite the contrary, Russia's actions and systematic targeting of civilian targets are akin to genocide. This does not fit into the image of a 'special military operation', which the Kremlin is trying to portray as a legitimate act through the arguments of demilitarisation and denazification.

Both domestic and foreign audiences are important. Evidence of Russian brutality needs to be concealed from both - the formula of the four Ds still applies: dismiss, distort, distract and dismay.

13 September 2022 maps two events - the liberation of Izium and the working visit of the Russian ambassador to Slovakia, Igor Bratchikov, to Ladomirova. To overwhelm the findings from Ukraine with information chaos, rhetoric that accuses the mayor of Ladomirova of desecrating the graves of the fallen heroes, soldiers of the Russian Imperial Army, is launched. The "blasphemous" act is condemned by the Russian embassy on 15 September.

Content performance comparison between topics of Ladomirová and Izium. Data obtained from Gerulata Juno based on keyword searches “Ladomírová” and “Izium.”

Ethnicity utilized by the information operation

Why, then, can the Russian accusation be described as disinformation? First of all, the cemetery has not been desecrated. Only the curbs around the crosses, which made it inefficient to maintain (e.g., mow) the area, were removed. According to historian Martin Drobňák, the reaction of the Russian embassy in Slovakia was inadequate as the cemetery remained dignified.

Second, the narrative that it was a cemetery of the Russian Imperial Army is not correct either. Even though the cemetery is labeled as Russian in the shared memory of the population, in reality, fallen soldiers of several nationalities lie there. This is confirmed by archives.

During the First World War, the idea that all soldiers, no matter what army they fought for, should be buried with dignity and in the same place was followed. Among the unknown soldiers buried in the cemetery also lie the members of the Austro-Hungarian army. 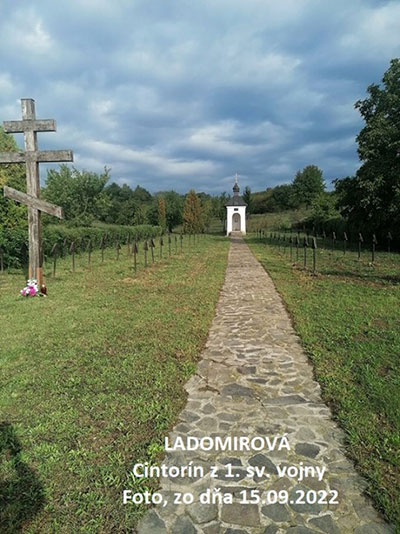 Photo published on the official page of Ladomirova at the time of the Russian ambassador's statement (15th September 2022). It documents the actual condition of the cemetery. Source: Obec Ladomirová.

It is important to point out the fact which is apparent from the abovementioned. Ethnicity played no role in this situation, but it served as a tool for the Russian information operation.

The factor of injustice towards the Russian nation evokes emotions that are very easy to manipulate. This logical scheme can be seen across the last years of Russia's information activities.

The false message is clear: Russia stands up to injustice and Russophobia. As a result, polarisation rises, hatred is rampant, and information chaos sets in. These grow in strength, especially when proxy actors help disseminate confusing and false information.

One could say that Ladomirova's case would not have experienced its initial boom if the hoax had not been further spread by the pro-Kremlin biker group Brat za brata (Brother for Brother), but especially by Attorney General Maroš Žilinka.

He described the steps taken as a "display of gross disrespect,“ an action "worthy of moral condemnation," and wanted to have the matter investigated to determine whether a crime had been committed.

It should be added that Maroš Žilinka has acted as a medium of pro-Russian views in the past, for example, in the case of the adoption of the Slovak-US Defence Cooperation Agreement.

In the case of the cemetery, however, the situation is more palpable; the sharing of Kremlin propaganda during the Russian aggression on the territory of Slovakia's eastern neighbor is undesirable, to say the least. The Attorney General's Office has strongly objected to the allegations of spreading Russian propaganda.

However, the campaign regarding the Ladomirova cemetery was started by the Brat za brata (Brother for brother) page by sharing a photo of Ladomirova’s mayor Cuper, who later received death threats. Quite humorously, the page also revealed its true nature while copying verbatim the original status of the Russian embassy.

False information was also spread across multiple accounts on Telegram, which today can be considered a hub for pro-Russian narratives heading into the Slovak information environment. Sources of content on the topic of Ladomirová. Data obtained from Gerulata Juno based on the keyword search “Ladomírová.”

Disinformation was also shared by other well-known sites that are part of the pro-Kremlin media ecosystem (e.g., Slovanské noviny, nocomment.sk, Hlavný denník, or Badatel.net). Their authors deleted several of the posts after the reaction of the state authorities.

Nevertheless, the Russian media managed to take advantage of the situation. News of the desecration of the graves of Russian soldiers from the First World War was shared by a number of Russian state-controlled media outlets. The false information was also broadcasted on the Russian channel Rossiya-1.

The narrative of an exclusively Russian cemetery, whose fictional desecration fit perfectly into the image of a vengeful and unjust "collective West", was pushed. After all, in times of war, the demonization of the enemy is crucial.

Neutralized in the early stages

On a more positive note, the dissemination of the hoax was quickly countered by a number of states and civil society actors.

In particular, the coordination of the response delivered by institutions and ministries, which identified the ongoing information operation, is to be commended. The information about the cemetery was identified as part of Russian propaganda by the MFA and MoD. MFA also summoned Igor Bratchikov on 20 September. In its statement, MFA condemned the misuse of places of remembrance to spread disinformation deliberately.

Among other things, MoD also pointed to contextually misused photos by the Russian Embassy, originally taken during construction work in early June.

The reaction of state institutions was subsequently disseminated to hundreds of thousands of people, picked up by the media and public television for its evening news coverage. Debunks were also shared by several civil society actors. The alternative scene, however, preferred the statements of the Attorney General's Office. 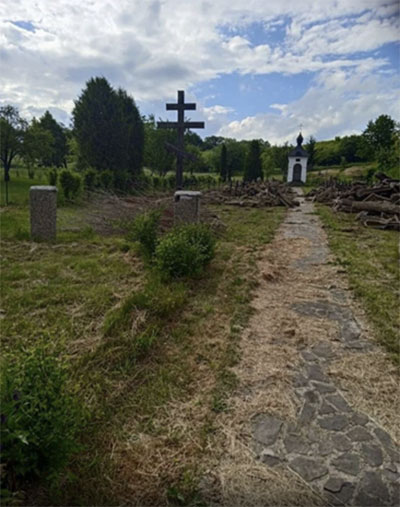 Photo published by the Russian Embassy in Slovakia. In reality, it was taken at the beginning of June, when construction work was underway at the cemetery.

After years of ignoring the problem of hybrid threats and disinformation, the above examples of operation identification, response and coordinated communication are a positive signal.

Through them, Russia's information operation was stopped in its early stages. The Ladomirova cemetery case did not overshadow the victims of Russian aggression in Izium.

The presence of pro-Russian sentiment in Slovak society has long persisted. This stems from a common history, specifically from the "liberation" after the Second World War or less than half a century under the USSR. The attitude towards Russia, or the West, on the other hand, represents one of the main lines of polarization of Slovak society.

This also stems from the belief from the 1990s that Slovakia should represent a neutral geopolitical bridge (mediator) between the West and the East. However, in terms of hybrid threats, this is one of the critical vulnerabilities used by various actors and third parties.

The consciously disseminated narratives of historical revisionism, the idea of Slavism, where Russia is presented as a giant bear protecting traditional values (fighting against the decadence of the West), also play a role. But at last, the true character and image of the enemy, who in the battle for hearts and minds pretended to be a brother, is revealed. 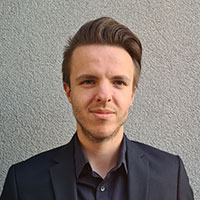 Peter Dubóczi is the director of the Slovak watchdog platform Infosecurity.sk. He also works as a research fellow at the Adapt Institute and as an analyst for the MapInfluenCE project at the Association for International Affairs in Prague. He holds a Ph.D. in Political Science from the Pavol Jozef Šafárik University in Košice. His research interests include hybrid threats, information and cognitive security, and topics related to the defense of liberal democracy.