Economic recovery won’t be as easy as expected.

Every day there is a traffic jam to enter in Tirana, Albania’s capital. Streets are overcrowded with people running for their daily jobs nor activities. Coffee shops are full almost all the time. There are some walkers in the streets wearing mask, but most of people are reckless. High building and skyscrapers are rising every day in the center and every corner of the capital. Days when everything was frozen and streets were empty seem very distant.

Indeed, this this is just a false façade. A bitter reality lurks behind it. Albanian economy has been severely hit from the Covid-19 pandemic. The national Institute, INSTAT, just revealed Albanian economy fell by 10.2% in the second quarter 2020, compared with the same period of 2019. This is the sharpest fall since 1997, when country was hit by the crisis caused by the fall of pyramid schemes.

“Trade, Transport, Accommodation and Food Services” were the most hit. This group decreased by 26.3% compared with the second quarter of 2019.

"For rent" signs have been added to the streets of Tirana and many other cities. Official data from tax Office show the number of businesses entities, (most of them small ones), that have passed into passive status was up by more than 40% during May-August 2020 period, compared with the same period of 2019. Most of them blame Covid crisis and the fall of purchasing power for their failures. This was to be expected in a country when small shops in trade and services were crucial for employment (for example there are about 18 thousand bars and restaurants or 16% of total entities in the country, as per INSTAT data).

World Bank warned in the beginning of April that Albania was vulnerable due to extended informality and high rate of self-employment (with a rate of self-employment at 34.7% of total employment, Albania stand first in the region in this indicator). “Countries where labor markets where informal, temporary, and self-employment is disproportionate, are likely to be confronted by job destruction, which will cause considerable hardship, especially if the social safety net is not adequate”, said the bank.

The government has adopted two support packages for people and businesses affected by the COVID-19 pandemic of a combined size of Lek 45 billion (2.8 percent of GDP) consisting of budget spending, sovereign guarantees and tax deferrals and wage subsidising for March-May period.

Yet, after the wage support ended, unemployment rose sharply. Official data from INSTAT said about 50 thousand people remain unemployed during the first half of 2020, or about 6% of total working force in private sector (non-agriculture and agriculture). This was the sharpest fall of at least a decade. About 60% of those unemployed were young, up to 29 years.

Pandemic had devastating effect on Albanian budget too. By mid-2020 public debt stood at 80 per cent of GDP, 14 percentage points higher than at the end of 2019, reaching highest record ever. In June 2020, Albania issued a 650 million-euro Eurobond to help cover the financing needs

Even before the pandemic crisis, Albania, one of the poorest countries in Europe, with its GDP per capita only 31% of European Union average, was performing poorly. This level has remained unchanged in recent years indicating the country has stalled in the so-called convergence process. This level of poverty is considered to be one of the main factors of high migration rate, while it might be pushing people to be involved in different crimes related with drugs, smuggling est.

Growth slowed down to 2% in 2019, from 4% the previous year, impacted also by a strong earthquake that hit central Albania in November 26 and the fall of energy production, due to dry weather. Public debt was in unsustainable levels of around 70% of GDP at the end of 2019, leaving less fiscal room for policy markers compared with other countries in the region, like Serbia (52%) or North Macedonia (39%). 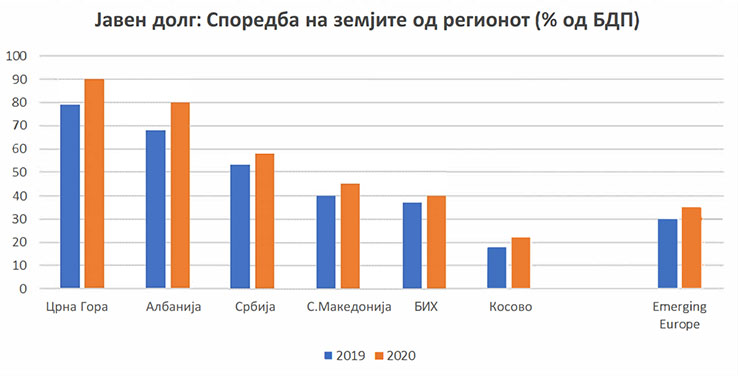 Structural weaknesses became more apparent during the pandemic. Poorly paid and informal jobs were widespread. The average remuneration rate of Albanian workers is the lowest among all Western Balkan countries (in terms of Purchasing Power Parities), according to World Bank. Over 30 percent of jobs are informal. The share of part-time jobs and self-employed is the highest in the region. Low-productivity agriculture absorbs close to 40 percent of total employment, while manufacturing and services are underdeveloped. Low wages are the main competitive advantage of exporters, with shows and textile commodities that go mostly to Italy, prevailing. Goods exports to Italy, Albania’s main trading partner, fell by more than 40 per cent year on-year during the most severe lockdown (March to May 2020), and by 15 per cent year-on-year in June July. Overall, total exports of goods in the first seven month of 2020 were 17 per cent lower in year-on year terms.

Economic fall is expected to increase poverty. According to World Bank, prior to the crisis of Covid-19, close to 4 in 10 Albanians still lived with less than US$5.5 per day.

Early projections of poverty following the earthquake and the Covid-19 pandemic suggest that poverty will continue to hover around 40 percent in 2020, essentially wiping out any poverty reduction from recent growth years, according to World Bank. Recovery won’t be as easy as expected

Initial hopes for a fast recovery are fading fast. Tourisms, one of the main drivers of Albanian economy, managed to survive with the “help” of Kosovo citizens. But its impact to the economy was irrelevant, compared with previous years when this sector was booming. The number of foreign citizen arrivals to the territory of Albania in the eight-month of 2020, fell by 64.2%, compared with the same period of 2019. Charter flight fell by about 70% in the 7 months of 2020 compared with the previous year, according to Tirana International Airport, the only airport operating in the country.

European Bank for Reconstruction and Development (EBRD) forecast in its latest “Regional Economic Prospects” that Albania and Montenegro will have the sharpest fall in 2020, with -9% respectively, due to their strong dependence on tourism. Serbia will suffer less with a fall of only -3.5%, followed by North Macedonia, Bosnia and Kosovo (5% respectively). The whole Western Balkan will fall by 5.1%, higher that -3.9% forecast of EBRD regions.

While the forecast for 2020 has remain unchanged compared with its previous report in May, EBRD has revised down remarkably expectation for Albanian economy next year by 7.5-point percentage. Its economy will grow only 4.5% next year, compared with the initial forecast of 12%. This is the sharpest downgrading compared, not only to all Western Balkans countries, but to all EBRD regions.

International Monetary Fund (IMF) is also pessimistic. In its Staff Concluding Statement of the First Post-Program Monitoring Mission, IMF revised down its forecast for 2020, from -5% in its April Economic Outlook to -7.5%, reflecting country’s dependence on tourism and remittances.

World Bank was the third institution to revise down economic growth of Albania, to -8.4%, compared with -5% at the beginning of the crisis, warning the crisis is increasing poverty by 5 point percentage to 41.6% (the per-centage of the population living with less than US$5.5 per person per day in 2011 PPP), through increased unemployment.

This is a signal that a V shape recovery is almost possible to happen. Although is expected the economy to recover from the second half of 2020 and strengthen gradually over 2021 as the impact from the shocks subsides and earthquake reconstruction continues, return to normality will take longer that expected.

Emigration is the “immediate” solution

Since early ’90, when the country switched from socialism to a democratic regime, migration of Albanian population increased sharply. About 1.2 million persons is estimated to have left the country in the last three decades, or more than 40% of its total population.

The trend revived again since 2014 and today Albania still remains major country in Europe regarding asylum applications in EU+ countries, being the first in Western Balkans countries and among the ten states in the world.

Young people are leaving mostly. Data from Eurostat show about 80% of persons that requested asylum since 2014 were less than 34 years old. One third of them were less than 14 years old, a desperate sign of their parent for the future of their children in Albania!

As the pandemic might increase further the poverty in Albania, emigration trend is expected is expected to be again the anchor of salvation for many Albanians adding further constrains to a fast and a sustainable economic development of the country! 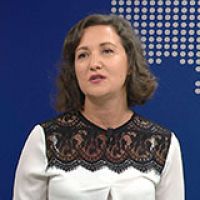